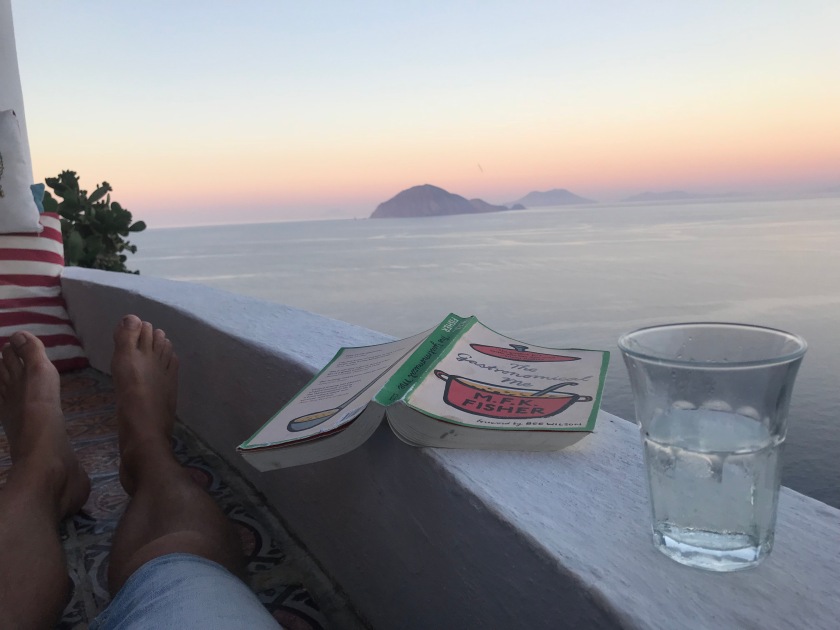 It seems that, if you’ve calves of steel, the lungs to match and a can-do attitude reminiscent of a minor Waugh novel, then paradise can still be found. Your best bet in getting there is to ignore any  timetable that assures you there is a ferry from Palermo and to head for one of the smaller ports, for whom such trivialities as passengers are important.  The ferry from Palermo has a tendency to be cancelled a few hours before departure, which is unhelpful, because they wait until it is too late to make alternative arrangements.  It is even more unhelpful when you discover that it wasn’t cancelled, but ran as normal, only, presumably, unburdened of troublesome luggage-laden yahoos.  But this is Sicily, it kind of goes with the territory. Head instead for Millazo, or Messina.  Less glamorous, yes, but at least you stand a chance of getting to paradise.

And then you arrive.  An unprepossessing dock, part building site, part dock.  Sicily again – they’re enlarging the dock, however they’re at an impasse – to finish the work, more materials are needed, particular materials that need a bigger boat to deliver them.  But the boat cannot come because the dock is too small.   But it will be sorted, somehow, one day.

Now, get ready for the calves of steel.  Your house will be an idyll, with astonishing views from your terrace across to mainland Sicily, with Etna in the distance; turn your head just a few degrees, and the other Aeolian islands are strung out before you – Filicudi, Lipari, Salina, Vulcano, and Stromboli (if you squint), smouldering in the distance. It is a landscape of mythology.  This house will also be several hundred vertiginous steps up the side of the extinct volcano.  Yes, a donkey will take your luggage (ignore the time they give you though, remember, you’re in Sicily now), but you do have to do the climb, too. There is a shop in the harbour run by Carlo, a rare blue-eyed Italian in this part of the world.  He’s not going to beat Aldi or Lidl in the value for money stakes, but let’s face it, any man that stocks Cynar on an island of fifty inhabitants gets my vote.  There is a reason that he stocks water by the crate and prominently sells wine by the box.  Buy your groceries in bulk and let the donkey do the heavy work – believe me, once you’re in for the evening, set for a G&T – you will not be ‘nipping out to the shops’ if you’ve forgotten anything.  Even if it’s the T.

But once you’re ‘home’ get ready to unpack that can-do spirit.  With a two ring hob hidden away in an old bread oven, the game is on to turn the courgette that you were given by Simone on the way up into dinner, with some pasta perhaps, some parmesan, garlic and oil (olive of course).  You’ve never met Simone before, but it seems that courgette growers are the same the world over – always desperate to off load their courgettes onto total strangers.

Begin by frying a crushed, whole garlic clove.  Put it into the pan with cold oil and bring them up to heat.  Once it browns, take the clove out and put it aside.  Now fry your sliced courgette until both sides are the colour of the forearms of the guy who owns the donkey that brought your luggage up.  This will take a lot longer than you expect.  But that’s fine.  An orange full moon will be rising into the sky behind Etna, your amour will point out all the stars that form Scorpio, and you will have resorted to G&. Because you didn’t believe the bit about not wanting to nip to the shop for some more T.  As the household gecko emerges to snack on the moths drawn to the light above the dinner table on the terrace, it will all start to feel a bit Gerald Durrell, childhood dreams can come true.

Cook the pasta – the usual way, for less time than it says on the packet and with enough salt in the water to make your blood pressure rocket to the heights of Scorpio (it’s ok, all those steps have already made you fitter than when you arrived).  Drain, keep some of the cooking water back and throw the pasta and two or three of the courgette slices (mashed up) into the frying pan you cooked the courgette in.  Toss, to get the oil all the way through, add parmesan and dress with the courgette slices.  Eat, under aforementioned full moon, and be glad that you’ve moved on from the G& to the wine box you wisely invested in.

Tomorrow, you can bathe in the bluest waters you’ve seen, or climb to the summit of the extinct volcano, gathering wild capers and fennel along the way (should you be feeling particularly Saturday Guardian) and see more butterflies in two hours than you’ve seen in a decade in the UK, fat emerald lizards, furtive jet-black snakes that vanish as soon as you see them, moths like hummingbirds and perhaps a praying mantis skulking amongst the artemisia.  My 21st century phone told me that it was 118 storeys, my calves of less -than-steel, had a hissy fit, but my inner Famous 5, 12 years old alter ego was having the time of his life.

And of course, there it is, niggling away somewhere, that upon your return, you’ll be hauled over the coals for something at work, the dogs will expect you to segue seamlessly back into their usual early morning walking routine, and the hedge you didn’t cut before you left will have grown rampantly.

So, have a return plan, and maybe next time, you’ll come back for longer – you’ll get up earlier so that you can buy fresh fish from the dock, be a bit fitter, so that you can climb the volcano without worrying that you might be the prime age for a heart attack, stock up on aperol, campari and cynar, as rewards for the climb, persuade a few more friends to join you, and for two or three weeks next year, you’ll relive the dream.