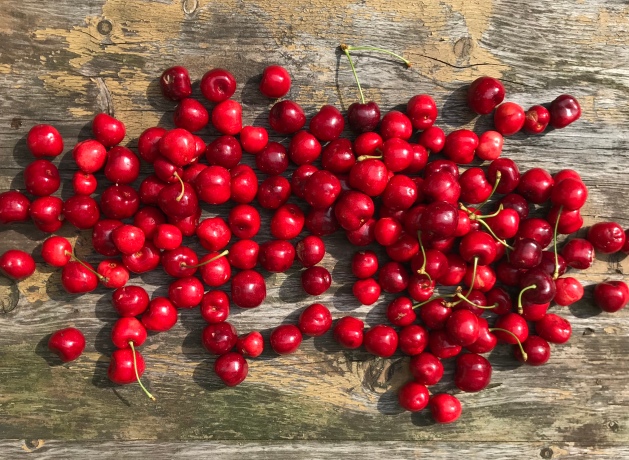 The cherries of July were tantalisingly slow to ripen.  This is the tree’s second year of cropping, after being rescued from the ‘dead and dying’ section of the garden centre.  It was neither, and now thrives in its new home, looking out over the leafy Rea Valley in the middle of Birmingham.  It thanks me for rescuing it with an annually increasing abundance of luxury.

The netting went on way back in April (as the local pigeons do not have the willpower to delay their gratification) and I’ve watched and worried as those small, green blobs, swamped by leaves, gradually swelled, and then suddenly reddened at the end of June; blushing, embarrassed by their weight gain.  Even then, I had to summon up more patience; lipstick scarlet deepened into a more luscious, 50s starlet crimson.  The wait was torture, I fretted in the small hours about determined birds and squirrels going on the rampage and stealing the lot.

But the day came.  I could wait no more.  In the middle of July, off came the nets, and out came the bowls as kilo after kilo of (I believe) the best cherries this side of Kent were stripped in one go to deliver the finest finger staining glut of the year.  We ate and ate cherries.  Warm and sweet from the tree they were without compare. I gave cherries to the neighbours.  I made jam. I made a quivering jelly. Still there were kilos of cherries.  This is where having a larder comes in handy, along with a network of Italians used to the joys and challenges of such abundance.  There is booze involved, and time, forgetfulness and, sometime in the future, the joy of rediscovered treasures.

This comes via a suggestion from Stefano of Italian Home Cooking, Carla Tomasi’s original adapted in Thane Prince’s Perfect Preserves.

700ml 40% vodka (that’s the stronger, more expensive stuff, but you’ll be left 50ml over for a couple of Vodka and tonics)

Sterilise the container you’ll be using (kilner jars work, or any container that you can seal with an airtight lid).

Add all the ingredients to your container.

Put it somewhere dark and out of the way.

Forget about it for at least six weeks.

Your cherry vodka is ready, but it will get better and better with age (although the cherries may bleed all their colour and begin to look like ghoulish pickled eyeballs straight out of Hammer Horror).  I recently found a two year old jar of figs that had had a similar treatment.  Two years ago, they were ‘ok’, but now, they induce rapture.  Sometimes, there is value and virtue in shoving things to the back of the shelf.

Drink the vodka as a liqueur, eat the cherries with ice cream, or in a grown ups’ trifle, but maybe, not til next year, or maybe even the next.

One thought on “Cherries Forever!”