I have been meaning to make vincotto for a while – but the essential ingredient (grape must – the juice of freshly crushed grapes, destined to be fermented into wine) is hard to come by in Birmingham. And I wasn’t going to buy all the grapes in the market, to make my own grape juice. Occasionally I do draw the line somewhere when it comes to experimental cooking. With a pedigree going back to the Romans, this is essence of grapes, caramelised, brown rather than purple and concentrated down to about a fifth of its original volume.

Anyway – a heads up from italianhomecooking that Waitrose now sell the good stuff; fresh merlot juice, by the litre, green lit my latest trip into the unknown.

I have a wonderfully eccentric book – La cucina dei monasteri, by Sebastian Papa from 1981. A little treasure chest of collected recipes from the convents of Southern Italy and Sicily. I’ve written before about these convents that preserved so many recipes that would probably have been lost. And this book is fantastic in that it gathers them together, ensuring their continuity. To be fair, often, they aren’t recipes, so much as recollections and descriptions, so you need to exercise both imagination and caution when trying things out. For me, it’s also a way of practicing my Italian (still as terrible as ever) as I have to translate the recipes before I can begin my experiments.

And so the ‘recipe’ for Vincotto, or Vino Cotto, as it’s named in the book.  This concentrated syrup of grapes is a sweet preservation for use as an ingredient or topping in numerous ways – on meat, on ice cream, on cheese, straight from the bottle, illicitly.  Italians get a bit dreamy eyed about their vincotto – I think it must trigger the memory button in their brains and transport them somewhere sweet, sticky and delicious.

The nuns of the convent attached to Sant’Andrea Apostolo all Vergini in Palermo (long gone, it was destroyed in the war) made their vin cotto rather more luxuriant that the standard method (which is just juice, reduced to syrup, by cooking). Their version adds dried fruit to increase the flavour (and although their method suggests leaving the fruit in the finished syrup, I hoiked mine out, as I’m planning on adding it to my Christmas mincemeat).

The syrup, kept in the fridge will (in theory) last for months.  But its star qualities will give it a much shorter shelf life in this house I suspect.

Below is the translated recipe from Papa’s book. Replace the must with sweet grape juice if you don’t have access to a vineyard. The dried pear and peach are probably not essential if you can’t find them – but I tracked some down in my local deli. I used two litres of juice which gave me 300ml of vincotto – 10 litres is fine if you have an Italian sized family, or are going into the convent business.

Yes it takes two days; no I don’t know if the wood ash is really necessary (can anyone enlighten me on why this is included)? But, the end result is, as the book says “buonissimo”.  Give it a go.

“Boil 10 litres of must and be careful when it boils, because it boils over, like milk.

Remove from heat and let it cool. When it’s barely warm, almost cold, add two fists of ashes: and if the ashes were wood it would be much better.

After having mixed well, taste to see if the flavor is still tart, like unripe things, if so add another handful of ash. Cover it and let it rest in the same container overnight.

Ideally use a terracotta or enamelled iron pot. The next day filter and starts cooking again.

Chopped orange peel is sweetened and boiled in water. The first water is thrown away and replaced, keep cooking until the skins have lost their bitterness: it’ll take four changes of water. In the wine that has been boiling for more than an hour, these pieces of orange are addded with various quantities of dried fruit: pears, peaches, and apricots, but not plums because they are sour.

Leave to cool and bottle together with the fruit. It’s really good.” 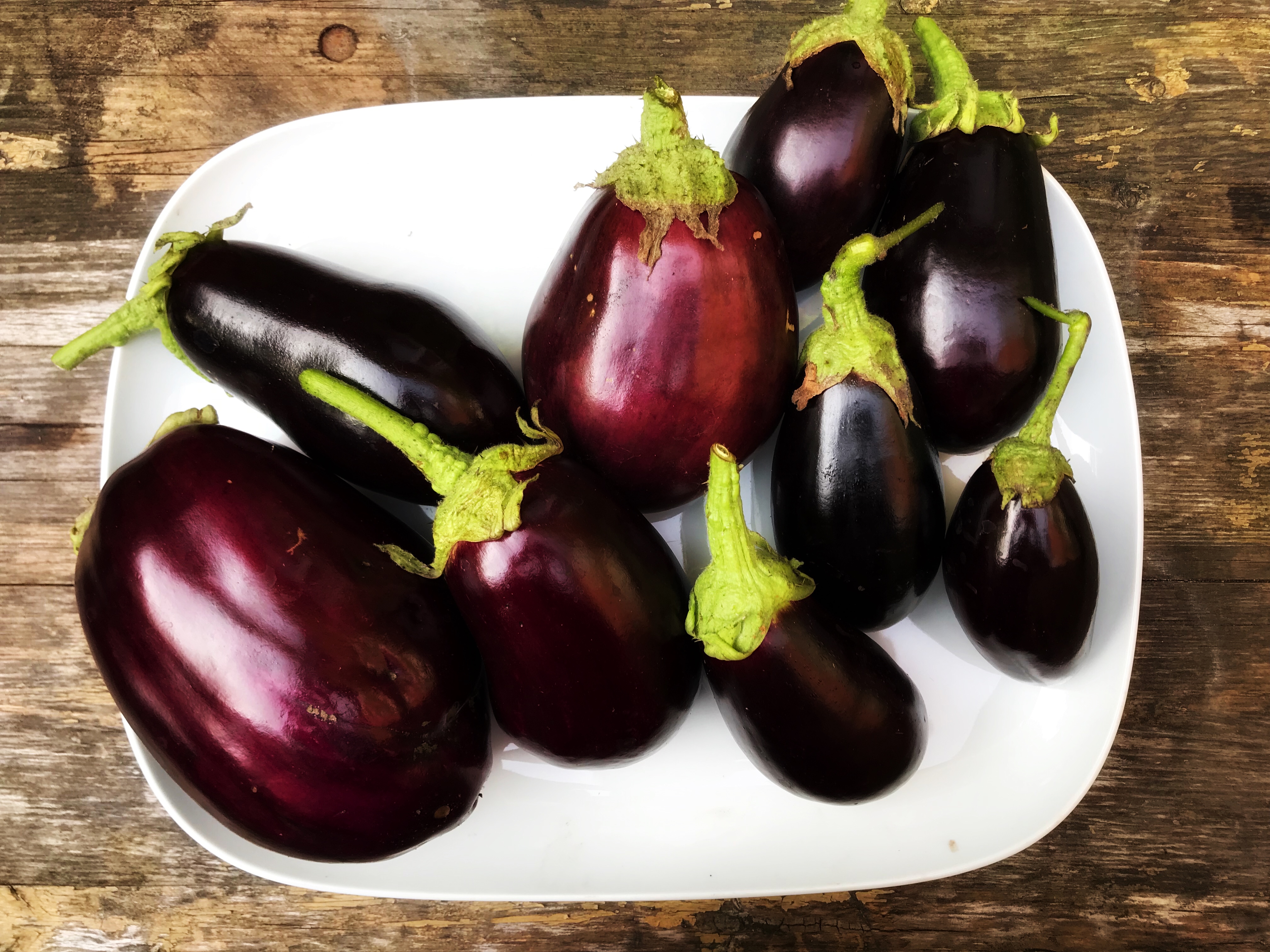 With allotments, come gluts.  It doesn’t matter how well you plan your rotation or how large the family is; there will always be times when you have too much; too much to eat, too much to give away, just too much to damn well cope with.  Some things are more prone to this gluttishness than others – runner beans have a mission to run amock, tomatoes conspire in a simultaneous, overwhelming rush of ripening, apples scold you with their lemming like windfalling.  Their fertility becomes a chore, a curse.   There are of course, other gluts that are never onerous.  I never heard anyone complain that they had “too many cherries”, or that they were “over run with greengages”.  And even when over abundance forces you to turn all WI and start pickling and preserving, a three year old jar of raspberry jam is always a delight to discover, whereas a jar of green tomato chutney half its age, never fails to ruin anyone’s day.

So what’s the Sicilian connection here?  Aubergines. Melanzane. That’s what.

Aubergines are buggers in Birmingham.  They are, admittedly, way outside their comfort zone.  So much so, that the only way I guarantee success is to grow grafted plants, prewarned about their life 52 degrees north.  Some years they work, some years they languish and succumb to black moulds and some years they go into overdrive.  2019 was one such year.  If I knew why, I’d be the horticultural love child of Monty Don and Alan Titchmarsh.

But, I’ve no idea why this year turned out so well. The summer has been decidedly lack-lustre; mostly rain, wind and greyness, with short-lived bursts of yah-boo-sucks extreme heat to remind us what summer could be, should be like. They’re in the same tunnel as some decidedly forlorn tomato plants, more inclined to produce stunted greenery than to reproduce.  Similarly, chillies have reluctantly, begrudgingly thrown out a few desultory pops of heat, but more as a two fingered insult than as a call of nature.

But, for whatever reason, the under-cover aubergines, got their feet under the table and decided to fruit, continue fruiting, and then carry on some more.

They’re proper aubergines too – all unforgiving stalk spines and corky ingrown blips that shelter woodlice.  They don’t have that glossy, pantone perfection of the supermarket.  More, the look of something stitched together by Sid Phillips in Toy Story.  But, hey, once they’ve been despatched, chopped, homogenised; they’re the best tasting aubergines in my postcode.

So it’s been a summer of caponata, of aubergines stuffed with mint and cheese, of parmigiana (whose idiot idea was it to make parmigiana for a summer party of 50?). And still they come.  The end is in sight, but a glut is a glut, and I’m about to be overwhelmed by Borlotti beans now jostling their way to the front of the harvest line.

Two things then come to my rescue.  Oil and sandwiches.

An aubergine sandwich is a thing of joy.  It’s also a thing of Palermo; a staple – taking fried steaks of aubergine, adding what ever you like;  cheese? basil? mortadella? tomato? anchovy?  If you want to go full Palermitan, add pannelle. But the aubergines are the creamy, almost meaty base that asks to be added to. Quick, cheap, wonderful.  On the other hand, an aubergine sandwich made with steaks that have been steeped in oil, infused with garlic, chilli or bay.  Well, that’s altogether a more wonderful thing.

Take your glut of aubergines then, slice them into generous 1cm thick steaks which you salt (as much to draw out water as imagined bitterness) and leave for at least an hour.  Then rinse and dry, then fry on griddle pan, scarcely oiled, to get “I did this, aren’t I cool” scorch lines, flip and repeat on the other side.  Take your cooked steaks, and start to pack a sealable jar with them, layering with the herbs or spices you’re using and topping up with olive oil as you go.  The flavours will do all the work here, so don’t use an expensive extra virgin grade, go for a cheaper, blended version. This is heresy as far as the Sicilian is concerned, but he’s not paying my olive oil bill!

As long as the aubergine is submerged below the oil, and the seal is airtight, these things will keep for months, languidly infusing.  In the middle of winter, when in need of a fast and easy lunch, you can slide a couple of these beauties from their slick, and add them to a Scooby Doo style sandwich, piled high on the best bread you have, or can make or can afford, with cheeses, meats, pickles, and enjoy as a virtuous, velveteen delicacy of your inexplicable green fingeredness. 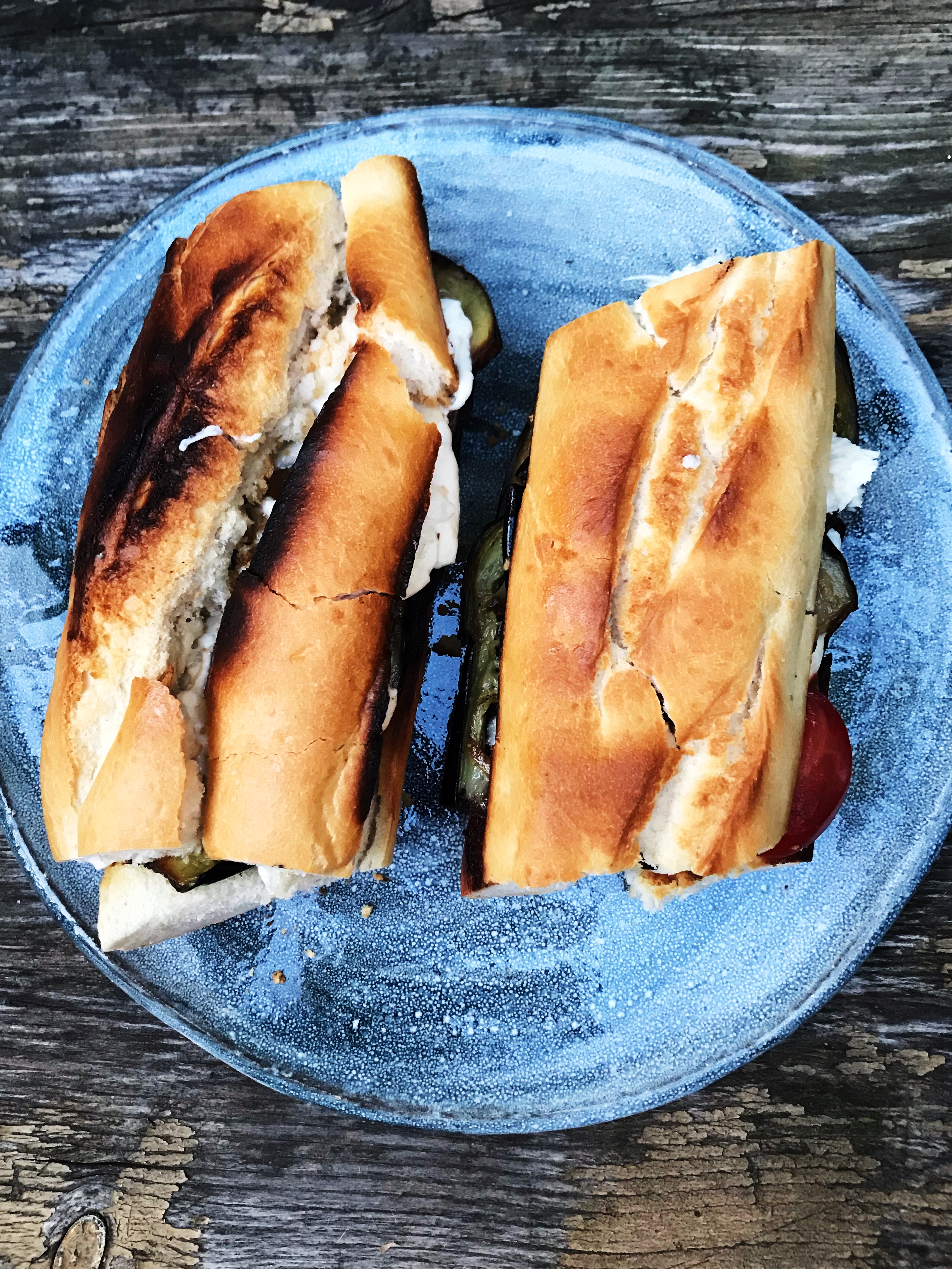